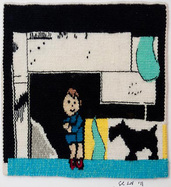 Untitled tapestry, 2011
Gordon Crook was represented by Gilberd Marriott Gallery from 2009 until his death in August, 2011.During this period he had two major exhibitions:
Stanley's Garden in March, 2009, and Contrasts in July, 2011.
Please note: we do not hold stock of Gordon Crook artworks. All works we exhibited were sold or are in private collections.
Catalogue note for Stanley's Garden

... a child's world seen in a scribble of a three-year old and sent me as cover for 'thank you' card. It has been seed and source of images for my new work. I know this domain, the place we return to from which we came, a garden of Eden before we filled our mouths with knowledge. A radiant life that opens the eye to yellow birds adults see only as leaves on a tree. A plane of being easier for me to access then Blake's 'universe in a grain of sand'. It's a garden where creature of mind come and go, where things are not subject to names and labels. Children tune into this energy behind the physical and become participants in the wonder of magical surprise. Children discover who they are in empathy with their surroundings, alas, not always to advantage, for unlike adults they make no division between the self and the other. This unaffected, innocent, observant level of existence is where I choose to be and try and maintain and cultivate. (While it protects me from much social practice and conditioning, admittedly it results in an immaturity that leaves me novice to much that is expected of adult behaviour and attitudes.)
In Stanley's drawing, the brush loaded with blue paint left two uncovered spaces, shapes that by chance might have been drawn by me. A standing figure of a man, and a head of an old man. As I peered further into the brush marks a rich landscape emerged and this fills and becomes content of my paintings.
- Gordon Crook, 2009
Article on Gordon Crook in NZ House & Garden